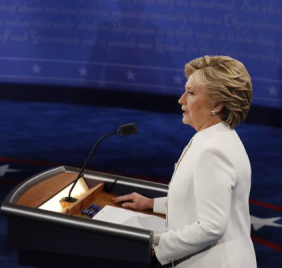 By any measure this was a comprehensive win for Democratic nominee Hillary Clinton, and a very poor night for her Republican opponent Donald Trump.

On the substance of the debate there were few issues where Mr Trump challenged Secretary Clinton. Time and time again, Mr Trump could not progress his arguments beyond mere assertions.

“His simplistic immigration plan was exposed by Secretary Clinton who mocked him for not raising “the wall” in his conversations with the Mexican president and using undocumented workers on his property projects,”  argued Ray D’Cruz in his analysis.

“Her pivot to Russia (Wikileaks being the link) provided the line of the night when discussing Vladimir Putin’s positive view of Mr Trump, “Well, that’s because he’d rather have a puppet as president.”

“On the economy, Mr Trump simply didn’t defend his own plan from a fairly obvious line (from the moderator) that economists say it doesn’t add up. He asserted that his growth forecast would solve all problems.”

“She took a defensive posture on the Second Amendment issue, rather than challenging Trump on what no restrictions would look like. And though she did utilize the Supreme Court segment to solidify the women’s rights issue, she got caught up with the specifics of the late-term cases. She won the point, but just not as cleanly as she could have.

But as the debate progressed, and drifted across topics during the six 15 minute segments, it was Secretary Clinton who dictated the flow. She seemed to determine when to pivot and switch back. Mr Trump followed, at times gullibly.

As he tried to move the debate from his treatment of women, Secretary Clinton returned to his pattern of abusive behaviour, drawing in the various people he has mocked and abused: Alicia Machado, the Khan family, Serge Kovaleski and John McCain.

The key moment in this debate was when Trump was asked if he would accept the results of the election, argued Jason Jarvis.

“He contradicted both his daughter Ivanka and his running mate, Mike Pence in saying that he would not agree to accept the results.  He finally settled on the idea that he would leave America “in suspense” and “look at it at the time” to see if he feels it was a fair election.”

“Above and beyond the debate, this stance should disqualify Mr. Trump from office, and it is likely he will be excoriated by the media and press for his statement.”

“First, she pointed out that this was a “pattern” for Mr. Trump that extends all the way back to the Emmy’s when he claimed that the awards show was rigged because “The Apprentice” did not get an award.  She pointed to the Iowa Caucus and the GOP Primary as other examples of how Mr. Trump always claims that things are rigged when he is losing.  Second, Secretary Clinton said she was “horrified” and “appalled” that any serious candidate would take such a position.”

Jarvis noted that her manner changed too during this argument: “She [showed] real emotion when discussing the issue of the election being rigged. This was a good moment for her; appropriate anger at the danger facing American democracy.”

On any debate measure (substance, strategy, manner, engagement, relevance, logic) Secretary Clinton won this debate, just as she has won the first two debates. Beyond this, even on the stuff the the media obsesses about, the ubiquitous knockout blow or hashtag trending one-liners, the debate was hers.

Election Debates is dedicated to improving the quality of election debates and debate commentary for the benefit of voter education and engagement. Election Debates is independent. Our judges are experts in competitive debate and apply the rules of debate to ensure objective analysis.

Error: Twitter did not respond. Please wait a few minutes and refresh this page.