50th Anniversary of the Kennedy-Nixon Debates 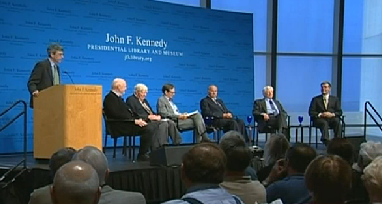 On the 50th anniversary of the first debate between John F. Kennedy and Richard Nixon, a Kennedy Library Forum was held with Kennedy advisers and journalists who covered the first-ever televised presidential debate. They reflected on the historic event and how presidential debates have changed over time. Tom Oliphant moderated. The panelists also responded to questions from members of the audience.

This text, and the video, courtesy C-Span.