The Debate and Development Resource Center Nigeria (DEDERC), in partnership with Election Debates, held an election debates workshop in Lagos on 25 and 26 November, 2010. 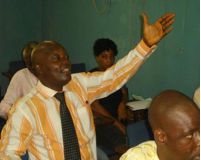 The Workshop, sponsored by the Commonwealth Foundation, brought together 27 journalists and youth leaders for a two day training session on organizing election debates in their communities.

The mission of the workshop was to increase participant knowledge about election debates and explore the potential of leaders’ debates to improve voter knowledge and participation during the electoral process. Nigeria is due to hold national elections in 2011.

The workshop was facilitated by Gabriel Aniabi, Franklin Ubi and Emeka Nwosu (DEDERC). The two-day program was designed by Ray D’Cruz, founder of Election Debates.

Day one covered principles and benefits of debate, the history  of leaders’ debates and design issues: who participates? What format works best? Who moderates? Who asks the questions etc.

Day two asked participants to come up with an appropriate design for Nigerian debates, on the underlying assumption that no one model is perfect and that a local model must be appropriate to be successful. At times participants were asked to address the conflicting aims of politicians, the media and the public.

Throughout the two days participants viewed and discussed election debates from the US, UK, Australia and Canada, before participating in their own debate.

Participant feedback was extremely positive. The event was covered by Lagos Television and participants agreed to form an Election Debate Network to progress debates within an election context.

Election Debates congratulates DEDERC director Jerry C. Nwigwe and his team for facilitating of the event and thanks the Commonwealth Foundation for their support. We note that Election Debates derived no fees for its contribution to this program.

« 50th Anniversary of the Kennedy-Nixon Debates
2010 Year in Review »