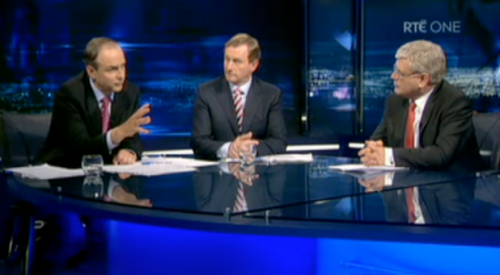 Colm Flynn, former chair of the World Universities Debating Championship, said “…in terms of the winner it’s tight call but there was a clear loser: Micheal Martin. Martin lost because his attack approach now came across as anger and frustration rather than conviction over what he was saying.  He found himself out gunned and couldn’t avoid the attacks on his record in government.

He added “Gilmore will, by now, have given up on any chance of being Taoiseach and that freed his hands a bit more. He could engage more in his natural aggressive style and also benefitted from his proposals not coming under the same scrutiny as Kenny’s and Martin’s.

You can watch the debate here.