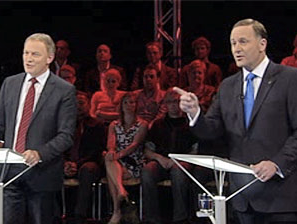 Mr Key achieved consistency by attaching individual issues and arguments to his overall vision for the country. From his introduction to discussions about capital gains tax, family cost pressures, small business, mining and the environment, Mr Key presented a vision for NZ based around growth, less tax, less red tape and jobs. Even the ‘what would you march for?’ question came back to these issues. Not terribly credible, but consistent. In a debate that offered no real depth in argumentation and where speakers were regularly cut off the by moderator, consistency counted.

My Key’s consistency was undermined by some less impressive moments. Assertions that Mr Goff was spending like a “drunken sailor” and his lazy Halloween jibe made Mr Key sound more like a school debater than a prime minister.  His closing remarks were also poorly chosen. In response to the final question where both leaders were asked to reflect on mistakes, Mr Key identified the controversial government decision to purchase a BMW car fleet as his example. He then qualified it by calling it a political error because it was nevertheless a good deal. If National insiders have a fear that Mr Key’s personal wealth may make him seem out of touch, it was an odd way to end the debate when the more conventional approach may have been to acknowledge mistakes while presenting the broader vision.

Mr Goff argued in a confident and relaxed manner and won some issues such as the reconstruction of Christchurch (he looked a lot less equivocal than his opponent), the sufficiency of the living wage and the environment (he’s happy not drill or dig everything, unlike Mr Key). Yet he failed in his overall objective: to show that NZ was heading in the wrong direction. To carry that proposition, he needed a clearer competing vision beyond the “fairness” and “opportunity” he presented at the start of the debate but never developed. There were too many parts to his message but no real cogency.

There’s another reason this was a close debate: the moderator, Guyon Espiner. Mr Espiner’s excessive questioning, interjections and interruptions meant a staccato debate, devoid of any depth. Due to this approach, we were denied analysis on almost every issue, including whether Labour left a deficit, the merits of a Capital Gains Tax and how Labour’s position on privatisation is consistent with existing partial privatisation. Furthermore, the moderator frequently pitched different questions to the speaker, rather than posing a single question and letting them engage. These mistakes suggest that the moderator did not understand the fundamental elements of a fair and effective debate, and therefore his role.

It hurt both speakers, but probably Mr Goff more. The opposition leader in any debate needs to both show why the government is deeply flawed, as well as why the opposition is ready to govern. These two tasks take time, and require some depth of argument. The prime minister really just needs to show that things are headed in the right direction. When one also considers that the viewing audience will be more familiar with the prime minister and his policy agenda, it is obvious enough that debates that allow no room for arguments will hurt the challenger.

The broadcaster did not stop there either. In what could be an unfortunate worldwide first, they chose to interrupt the debate with “expert analysis” to completely insult the intelligence of viewers. Please, TV One, next time, let them debate and let the audience decide.