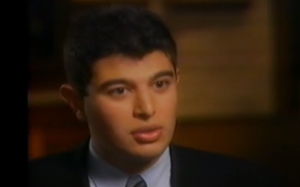 George Farah, author of No Debate and executive director of Open Debates, talks to Bill Moyers from PBS about what’s wrong with US presidential debates. This 2004 interview can be viewed in three parts: Part 1 | Part 2 | Part 3

In the interview, Farah discusses how the Commission for Presidential Debates (CPD) was founded by both Republican and Democratic parties to escape the previously independent sponsor, the League of Women’s Voters.

The interview looks at how the major party candidates seek to stifle debate: preventing third party candidates from participating, limiting rebuttal, preventing candidates from questioning each other, requiring audience members in Town Hall debates to submit questions to the moderator and approving moderators. All this is done under the watch of the CPD, a private organisation that many Americans may confuse for an independent authority.

While countries like Australia, the UK and Canada have held televised leaders’ debates for many years too, none have gone down the path of establishing a debates commission, as the US has done. This interview, and Farah’s debate is a reminder that a debates commission must be truly independent if it is to serve the voters.