Analysing the tactics of the Second Leaders’ Debate

For the first feisty 20 minutes of the Second Leaders’ Debate, Prime Minister Kevin Rudd dominated the conversation. On two of the first three questions  he doggedly pursued Opposition Leader Tony Abbott with a series of follow up comments and challenges. He delved on service cuts and the paid parent scheme and Mr Abbott didn’t like it. Eventually Mr Abbott snapped, asking “does this guy ever shut up?” In the heat of a leaders’ debate the Opposition Leader failed a basic test: poise under fire. 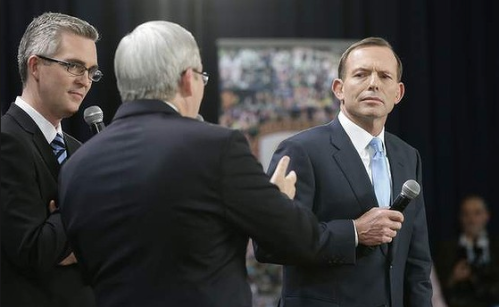 Mr Rudd’s aggressive opening was  a pre-determined tactic. Down in the polls, he came out swinging, and based on Mr Abbott’s response, his punches landed. We’ve seen this before. One year ago, before an audience of 50 million, President Barack Obama kick-started his campaign with an overtly aggressive performance against challenger Mitt Romney in their second debate. Obama had been roundly criticised for a lacklustre performance in the first debate. Maybe the Obama staffers now working on the Rudd campaign had something to say.

While Obama’s super-charged performance lasted the full 90-minute debate, Mr Rudd’s aggression curiously petered out after 20 minutes. It didn’t seem deliberate. It seemed to stem from the wind being knocked out of his sails by a question on the new bank deposit tax. The Prime Minister’s disingenuous response (to link the government’s new tax to the four-year old global financial crisis) saw him default to a verbose history lecture. It was in stark contrast to the crisp attacks from early in the debate. The questioner looked unimpressed, the audience was lost and Mr Abbott called him out.

That seemed to be the turning point. Mr Abbott grew in confidence, while Mr Rudd went into his shell. Mr Rudd restrained himself on key arguments and his direct challenges to Mr Abbott slowed. The Prime Minister’s body language changed too: he stopped walking toward Mr Abbott, and didn’t stare at him as intently while speaking.

On the substance of the debate, Mr Rudd’s earlier progress on parental leave and service cuts was halted. Mr Rudd struggled to make inroads on campaign strong suits such as industrial relations and the environment. Mr Abbott made both issues personal: he declared himself a voice against WorkChoices in the Howard Cabinet, and claimed to care about the environment as much as anyone in the room. Both approaches were open to attack but Mr Rudd didn’t make enough of it.

Personalising issues worked for Mr Abbott. It allowed him to convey sincerity (one of the benefits of his more natural debating style) and possibly allowed him to avoid a more policy-oriented argument on both fronts. Memorising and retelling some Abbott comments on both issues might have been a good tactical response for Mr Rudd. (It’s odd that leaders’ do not do this in debates).

Mr Rudd did surprise on a Coalition strong suit: the asylum seeker question. He handled better the nuance of the question (Australia’s commitment to the UN Convention) and gave the argument some detail and depth. Mr Abbott trotted out his usual, well known lines. However, Mr Rudd didn’t build on the good start, failing to properly rebut Mr Abbott. Sign posting yet another tactic used by both men, Mr Rudd chose not to let that debate go on. It seems that when difficult issues arise, leaders would rather let an opponent have the last word and end the conversation than prolong it through rebuttal.

It’s a bad debate tactic but perhaps a good political one. There are at least two possible explanations. One is that Mr Rudd came to talk about service cuts and didn’t want to cloud the message. The other is that neither speaker is actually confident of persuading the audience. For these men debates are about helping people confirm their existing biases rather than persuading them to a different view.

Reflecting on both debates, it’s clear that real debate with properly developed arguments and rebuttal is not possible in the current format. One and two minute responses offer little more than a series of assertions. Questions that cover the field allow no in-depth focus on critical issues. Mr Rudd called for themed debates before the election, including one dedicated to economic policy. The Coalition refused the request. Both parties pitch ideas for these debates based on self-interest. What a pity that the public interest is not the primary concern when determining the format, focus and frequency of these debates. We can do much better.